What If? Serious Scientific Answers to Absurd Hypothetical Questions by Randall Munroe

I have never done this, but I am going to quote verbatim the author’s biography on the dust jacket of this weird, wild, wonderfully funny book, What If?  “Randall Munroe, a former NASA roboticist, is the creator of the webcomic xkcd and the author of xkcd: volume 0.  The International Astronomical Union recently named an asteroid after him; asteroid 4942 Munroe is big enough to cause a mass extinction if it ever hits a planet like Earth.  He lives in Cambridge, Massachusetts.”

The subtitle, oddly enough placed above the main title, is “Serious Scientific Answers to Absurd Hypothetical Questions.”  I laughed on almost every page, while remembering some of the absurd questions I asked as a youngster.  Sadly, my most absurd question is not here: “What would happen to a ball dropped into a hole which went clear through the planet?”  It was at a Boy Scout Summer Camp, and the recipient of this question, rolled his eyes and said, “Wait, stop, we are way off target here, we are talking about eclipses of the moon!”  I often cut off my students who begin with, “This might be a dumb question…” by telling them “there are no dumb questions, only dumb answers.”  I guess now I will have to add No dumb questions, only some pretty funny absurd ones.”

Here are some examples of Munroe’s wit and humor.  “What would happen if the Earth and all terrestrial objects suddenly stopped spinning, but the atmosphere retained its velocity?”  Answer: nearly everyone would die.  Then things would get interesting.  At the equator, the Earth’s surface is moving … a little over a thousand miles an hour,” resulting in “a sudden thousand-mile-per-hour wind. […] everyone and everything between 42 degrees north and 42 degrees south …about 85 percent of the world’s population – would suddenly experience supersonic winds.  The highest winds would only last for a few minutes near the surface; friction from the ground would slow them down.  However, those few minutes would be long enough to reduce virtually all human structures to ruins” (1). 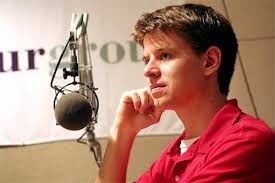 Some of my favorite questions include, “If an asteroid was very small but supermassive, could you really live on it like the Little Prince [from Antoine de Saint-Exupéry’s novel, The Little Prince” (102).  I wondered about this the first time I read this wonderful ostensibly children’s story.  Here’s another, “What if I jumped out of an airplane with a couple of tanks of helium and one huge balloon?  Then, while falling, I release the helium and fill the balloon.  How long of a fall would I need in order to slow me enough that I could land safely?” (150).  Some people obviously have way too much time on their hands!  And finally, “If two immortal people were placed on opposite sides of an Earthlike Planet, how long would it take them to find each other?”  He did say absurd questions!  Spoiler alert: 3,000 years.  Other questions involve draining the oceans (204), and guessing on every SAT multiple Choice question (278).

For lots of fun and laughter – and some serious questions – pick up a copy of Randall Munroe’s book, What If? Serious Scientific Questions to Absurd Hypothetical Questions.  5 stars.