Child of God by Cormac McCarthy

Despite numerous friends and strangers touting the wonderful novel, All the Pretty Horses by Cormac McCarthy, I never could get much past the first 15-20 pages.  This doesn’t happen that often, but when it does I must invoke the rule of 50.  Then I read The Road and really enjoyed it.  No Country for Old Men soon followed along with Blood Meridian.  I decided to take at look at some of his earlier works, and I started with Child of God.  This tense novel fits in nicely with the others I have read.

Lester Ballard has been falsely accused of rape for a woman he sees in the woods while hunting.  The sheriff arrests him, but it soon becomes obvious he is innocent and released.  The experience seems to have an effect on Lester, and he begins a slow spiral into bizarre behavior and insanity.  The novel starts off gently, innocently, but as events unfold, the tension mounts.  Sometimes – especially early on – I laughed at and with Lester, as he roamed the forested mountains of Eastern Tennessee.

Lester’s farm is about to be sold at auction.  He protests, and someone hits him over the head.  Lester is dazed, and blood trickles from his ears.  This injury became a major factor in the rest of the novel. 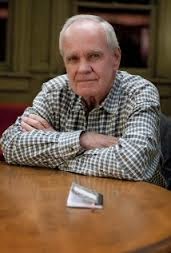 McCarthy has a talent for setting his characters precisely where they belong.  He writes, “Ballard descended by giant stone stairs to the dry floor of the quarry.  The great rock walls with their cannelured faces and featherdrill holes composed  about him an enormous amphitheatre.  The ruins of an old truck lay rusting in the honeysuckle.  He crossed the corrugated stone floor among chips and spalls of stone.  The truck looked like it had been machine gunned.  At the far end of the quarry was a rubble tip and Ballard stopped to search for artifacts, tilting old stoves and water heaters, inspecting bicycle parts and corroded buckets.  He salvaged a worn kitchen knife with a chewed handle.  He called the dog, his voice relaying from rock to rock and back again.  //  When he came out to the road again a wind had come up.  A door somewhere was banging, an eerie sound in the empty wood.  Ballard walked up the road.  He passed a rusted tin shed and beyond it a wooden tower.  He looked up.  High up on the tower a door creaked open and clapped shut.  Ballard looked around.  Sheets of roofing tin clattered and banged and a white dust was blowing off the barren yard by the quarry shed.  Ballard squinted in the dust going up the road.  By the time he got to the county road it had begun to spit rain.  He called the dog once more and he waited and then he went on (38-39).

This vivid writing is so intense, I expected something odd, or strange, or bizarre to happen at any moment.  So early in the novel, I am lulled into the belief this was a story about a poor, unemployed mountain man trying to scratch out a meager existence.  He was that, but as the novel unfolds, he becomes so much more.

Most definitely an adult novel, Cormac McCarthy's Child of God, will make the hair stand to attention.  The ending I imagined to be inevitable did not happen.  I read this brief novel in a little over two afternoons.  I did not sleep well that night.  5 stars.