One of these years, I am going to assemble all the novels shortlisted for the Booker Prize, and read them along with the jury, and then try and guess which will win.  For years I have been waiting until the final announcement before buying any of the nominees.  But lately, I have been reading some novels written by previous winners, and I have enjoyed them every bit as the winners.  My wife gave me a copy of J by Howard Jacobson, who won the Booker in 2010 for The Finkler Question.  Jacobson’s 2014 novel, J, shows me exactly what I am missing among the also-rans.

Set on an island surrounded by seas that “lap no other shore,” the mysterious villagers, suspicious of strangers and each other, constantly apologize for even the slightest of offenses.  The government suppresses all history, heirlooms, photos, and anything which might remind the people of “What Happened, If It Happened.”  Many residents have secret stashes of letters, diaries, and old books, which they use to try and piece together the past.  Chilling reminders of Aldous Huxley’s Brave New World, with tinges of Bradbury’s Fahrenheit 451.

Kevern Cohen meets the stunningly beautiful Ailinn Solomons who arrives one day on the shore.  Kevern experiences love at first sight, and Ailinn is attracted to Kerern after some prodding by Esme Nussbaum, her guardian.  Many of the characters have cryptic phone calls about the couple, including a shady police inspector, a gnarly barber, and Esme.

Jacobson writes, “Esme Nussbaum looked around her while Rabinowitz spoke.  Behind his head a flamingo pink LED scroll repeated the advice Ofnow had been dispensing to the country for the last quarter of a century or more.  ‘Smile at your neighbor, cherish your spouse, listen to the ballads, go to musicals, use your telephone, converse, explain, listen, agree, apologize.  Talk is better than silence, the sung word is better than the written, but nothing is better than love’” (17-18).

This sounds innocuous, but apparently, music has been censored, the telephones are all tapped, and everyone reports -- to some unknown person -- what they have heard and seen. 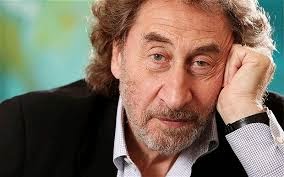 The title of the book is actually a capital “J” with two horizontal lines across the middle.  The custom has been to put two figure across your mouth each time a word is spoken which begins with a “J.”  Almost every J has two lines on the printed page, except for one word: “just,” and as the novel progressed, I began to notice words without the two lines.  Curiousier and most curious.  This novel cries out for a second read.  While I have a pretty solid theory about “What Happened, If It Happened,” not all the clues lead to the same conclusion.

Kevern’s father left him several boxes labeled for opening at important stages of his life.  He fears opening the one marked open when you are about to become a father.  These boxes disturb Kevern, because, as Jacobson writes, “Hoarding, surely, was random and disorganized, the outward manifestation of a disordered personality.  His father’s boxes hinted at a careful, systematic, if overly secretive mind” (51).  Kevern suffers from OCD, and he worries about everything.

Howard Jacobson’s J will provide lots of absorbing reading.  Part mystery, part love story, and part dystopia, it warns me about what I might be missing in those second novels which lose out every year.  Certainly many of them must deserve  5 stars.