In my rich, interesting, and varied reading life, I have made friends with numerous strange and weird novels.  From Joyce’s Ulysses and Finnegan’s Wake to Mark Z. Danielewski’s House of Leaves – the story of a house larger on the inside than on the outside – my mind has been bent, my logic challenged, and my thought processes twisted beyond understanding.  However, a new novel by Joseph Fink and Jeffrey Cranor has topped them all for sheer bewilderment.  Welcome to Night Vale stemmed from a podcast posted by the authors and presented as a radio show for the fictional town of Night Vale, which reported on the strange events that occur there. The series was created in 2012.  Cecil Gershwin Palmer is the host, main character, and narrator of the novel.

The podcast typically airs on the first and fifteenth of every month, and consists of "news, announcements and advertisements" from the desert town, located "somewhere in the Southwestern U.S.”  In an interview with NPR, Joseph Fink said that he "came up with this idea of a town in that desert where all conspiracy theories were real, and we would just go from there with that understood.”

The novel is part suspense, part mystery, mostly comedic, and all mind-bending.  To give a taste of the novel, I will offer a few short passages, none of which will give away any the plot, but all will reveal details of the story.  That’s my version of a typical line by the authors.  Buckle up, here we go:

“Clocks and calendars don’t work in Night Vale.  Time itself doesn’t work” (4).  “There was always some world-ending cataclysm threatening Night Vale.  Feral dogs.  A sentient glowing cloud with the ability to control minds (although the Glow Cloud had become less threatening since its election to the local school board)’ (5).  Most mind-bending of all is this description of Jackie Ferro, a perpetual 19-year old woman who ran a pawn shop.  The authors wrote, “She understood the world and her place in it.  She understood nothing.  The world and her place in it were nothing and she understood that” (5).  Jackie meets a mysterious man she does not recognize, and decides “to make a list of everyone who might know about” him. […] She pulled out “a promotional pen from a festival put on by the city a few years ago.  THE NIGHT VALE SHAKESPEARE IN A PIT FESTIVAL.  FALL INTO THE BARD’S WORDS, it said.  The broken leg had been painful, but she did love the pen” (43).

Jackie visits “Old Woman Josie” to find out if she knows anything about her missing son, Josh.  “She turned.  There was a being that was difficult to describe, although the best and most illegal description was ‘angel.’  Angels are tall, genderless beings who are all named Erika” (58).  Of course they do not exist. // “‘I was just doing some trimming,’ the being said.  They were holding hedge trimmers and standing by an empty patch of dirt.  There were no plants of any kind anywhere near them” (58). 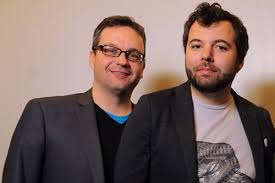 I could go on like this for way more time than I have, or don’t have, or wish I didn’t have, or have, but this fun and breezy read will offer many hours of humor, suspense, tears, joy, and mystery.  Classified as a YA novel, adults are forbidden to read it.  In fact, everyone should read it.  Let me be the first to give you a hearty “Welcome to Night Vale” by Joseph Fink and Jeffrey Cranor.  5 stars.