Don't Sleep, There Are Snakes by Daniel L. Everett

Everett’s Don’t Sleep, There’s Snakes was the May read for my book club. From the description offered by the member, it seemed as if it might be an interesting anthropological look at an isolated group of indigenous peoples in the Amazon. The Pirahã (pronounced “pee-da-HAN”). When I got a copy of the book, the dust jacket revealed Everett went to the Amazon as a missionary.

Since I am adamantly opposed to missionary work – I admire the prime directive of the Federation of Planets: non interference in the culture of indigenous people – I almost stopped right there. But, this man lost his faith, so I was intrigued.

Daniel Everett moved his wife, Keren, and their children (seven, four, and one!!!) to this remote jungle village with no electricity, no water, and no contact with the outside world. Shortly after his arrival, the Brazilian government banned missionaries from these tribes, so his sponsor, The Summer Institute of Linguistics, tried “to find a way around the governments prohibition” (14). Nice. So Daniel enrolls in a graduate school to study linguistics, and his project is to study the language of these people. He is re-admitted to the Amazon as a “scientist.”

The next problem involves linguistics. Linguistics is akin to “statistics” for English majors -- boring. But for the sake of a friend, I began to slog through the jungles of crazy spellings, crazy phonetics, and lots of missionary-speak.

Then, I did something I rarely do. I skipped to the end to see what later chapters had to offer, and I came upon Chapter 17: “Converting the Missionary.” Everett writes, “the challenge of the missionary [is] to convince a happy, satisfied people that they are lost and need Jesus as their personal savior” (266). He quotes his “evangelism professor,” who said, “You’ve got to get ‘em lost before you can get ‘em saved” (266). Disgusting. When I think of the millions of lives lost as a result of missionaries over the ages, the cultures destroyed, the languages, traditions, stories, obliterated, the acts of genocide committed in the name of religion and progress, my stomach turns over and over.

Fortunately, Everett comes to the conclusion that “the universal appeal of the spiritual message I was bringing was ill-founded” (269). Indeed. Everett’s wife was from a missionary family, and inexplicably, she found it impossible to stand by her husband after his enlightenment and took the children and went home.

The “primitive” Pirahã asked Everett if he had ever seen Jesus, and when he said no, the wondered how he could believe in such a person. The Pirahã live an immediate life, closely intertwined with their environment and the daily struggle to find food. These people have a clear “acceptance for things the way they are, by and large. No fear of death” (271). Who is the most rational in this story?. 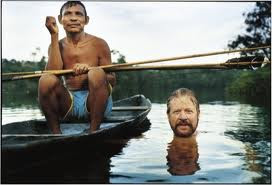 Everett closes this chapter with some startling admissions: “I have given up what I could not keep, my faith, to gain what I cannot lose, freedom from what Thomas Jefferson called ‘tyranny of the mind’ – following outside authorities rather than one’s own reason” (272) Hallelujah! Later, on the same page, “William James reminded us, we shouldn’t take ourselves too seriously. We are no more nor less than evolved primates” (272)..

The nuns would always tell us about the “Eleventh Commandment” – MYOB – Mind Your Own Business. At the book club, I raised the question, “Why can’t we just leave these people alone? What is the purpose of studying them, proselytizing them, and destroying them in the process?” One member suggested, if we don’t study them some corporation, oil company, logging firm, or factory farmers will..

Have humans learned nothing from history? Especially the history of the last 135 years or so? The near extinction of native peoples stripped of their land, their culture, the source of food and shelter, driven to shameful living conditions on reservations – in many cases far from their ancestral homes? Why don’t we pay attention to the oft quoted line of George Santayana, “Those who cannot remember the past are condemned to repeat it.” Five stars for Chapter 17..