By Nightfall by Michael Cunningham

Michael Cunningham has written a series of novels about relationships – how they form, how they grow, and how they die. He manages this without being too dark, but rather he handles them in a thoughtful and sensitive manner. He is probably best known for The Hours, a multilayered reworking of the Virginia Woolf novel, Mrs. Dalloway. Specimen Days tells the story of three people in three different time periods – similar to the structure of The Hours – however, Walt Whitman’s Leaves of Grass provides a backdrop. By Nightfall parallels the story of Aschenbach and Tadzio from Thomas Mann’s erotic classic, Death in Venice.

Peter and Rebecca married in their early 20s, had a daughter Bea, and live in the Soho section of Lower Manhattan. Peter owns an art gallery struggling to reach the upper tier of galleries in a crowded NY market. Rebecca is a writer, and she publishes a literary magazine just barely surviving.

The families of the couple cast a shadow over their lives. Peter’s brother, Michael, died as a young man, and Rebecca’s younger brother is a drug addict. One day, Ethan “Mizzy,” shows up in Soho, and adds further complications to the plot.

Peter and Rebecca have a tender and loving relationship, which Peter frets over and second guesses at every turn. Cunningham does this in a structurally peculiar way. As Peter muses on his marriage, his life, and work, he frequently inserts parenthetical asides, as if a second narrator stood over his shoulder adding details or making corrections.

Here is an example from a passage about the home of Rebecca’s parents. She felt a slight embarrassment, but, as Cunningham writes: “Some – many – would have found this room disheartening, would have in fact been unnerved by the Taylor’s whole house and the Taylors’ entire lives. Peter was enchanted. Here he was among people too busy (with students, with patients, with books) to keep it all in perfect running order; people who’d rather have lawn parties and game nights than clean the tile grout with a tooth brush (although the Taylor’s grout could, undeniably, have used at least minor attention). Here was the living opposite of his own childhood, all those frozen nights, dinner finished by six thirty and at least another four hours before anyone could reasonably go to bed” (49).

I also enjoyed another aspect of this novel -- the generous sprinkling of literary references throughout the story. Joyce’s Ulysses, Proust, Jane Austen, Anna Karenina, Eliot’s Daniel Deronda, Henry James’ Portrait of a Lady, Dickens’ Tale of Two Cities, Flaubert’s Madame Bovary, Dante, Hamlet, Homer, Cheever, and many others. Fitting these selections into the fabric of the story would make an interesting research project.

But the most telling of all, occurred on a train trip to visit a client of Peter’s. Mizzy is searching for an occupation to save himself from drugs. He thinks “something in the Arts, perhaps a curator” would be a good choice. Peter sits opposite Mizzy and notices a copy of Thomas Mann’s Magic Mountain, which “sits open but unread on his lap” (169). They discuss Mann and Peter asks him about Death in Venice. 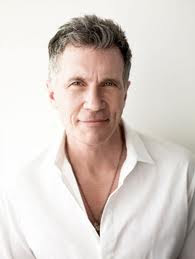 Cunningham’s By Nightfall is altogether a clever, absorbing psychological voyage into the lives and loves of Peter and Rebecca with an unusual twist on the last pages. If you have never read Cunningham, this novel is a good starting place. 5 stars