The Song of Achilles by Madeline Miller

For many, many years, I have loved and admired Homer’s Odyssey. Lately, I have experienced a growing admiration for his Iliad. I recently reviewed The War that Killed Achilles by Caroline Alexander. And now, a new entry onto my “desert island shelf” will take its place with these foundations of western literature. The Song of Achilles by Madeline Miller tells the story of the greatest warrior of the ancient world from the point of view of Patroclus, his companion.

Even though I knew exactly how the story would end, I reveled in every page of this enthralling story. Miller has a tinge of the voice of Homer, with a couple of epithets thrown in for good measure. Rosy-fingered dawn even gets a mention.

Patroclus accidentally killed a boy who bullied him relentlessly. Clysonomous was the son of a noble family, and the penalty for such a killing was death or exile. Patroclus lacked the physical and mental strengths required of the son of a king, and his father’s disdain appeared evident to everyone – even the young Patroclus. The verdict was exile.

Peleus, King of Phthia, and father of Achilles by the divine nymph, Thetis, routinely accepted such exiles for the treasure that came along with the unfortunate individual. Patroclus became a close friend and companion to Achilles, destined to become “Aristos Achaion. Best of the Greeks” (176), “the greatest warrior of his generation” (160).

When Achilles turns thirteen, he is sent to study with the centaur, Chiron, to learn the arts of war and medicine. Patroclus is left behind, but by this time, he has developed a deep and abiding relationship with Achilles. He wheedles Achilles location from Peleus, and Patroclus immediately runs after his friend. The bond with Achilles is mutual. He says, “I hoped you would come” (70).

Years pass and the boys grow closer. When Achilles is 16, Odysseus, King of Ithaca, the “man of twists and turns” comes to seek Achilles’ help in rescuing Helen of Greece, wife of Menelaus, King of Sparta. But Peleus knows of the prophecy and the flimsy bond drawing all these heroes together for the Trojan War. Achilles and his father were not present when Agamemnon and his brother Menelaus extracted a promise from the disappointed suitors to swear allegiance to Helen and her chosen husband, Menelaus. Peleus spirits him away – again without Patroclus -- to an obscure, poor kingdom famous for its dancing women, led by the daughter of the king. But Patroclus and Odysseus find him again. Odysseus convinces Achilles to raise and lead the best army in the ancient world – the Myrmidons. 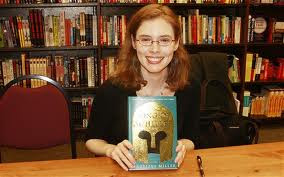 Patroclus realizes he will lose Achilles to this adventure. Miller writes, “If he was nervous, even I could not tell. I watched as he greeted them, spoke ringing words that made them stand up straighter. They grinned, loving every inch of their miraculous prince: his gleaming hair, his deadly hands, his nimble feet. They leaned towards him, like flowers in the sun, drinking in his luster. It was as Odysseus had said: he had light enough to make heroes of them all” (186).

Thus, they set sail for that fateful battle before the walls of Troy. Hector, Ajax, Achilles, Odysseus, Menelaus, and countless others -- all players in one of the greatest stories ever sung, recited, read, studied, and loved. Read The Song of Achilles. As soon as you can. You, too, will be captivated and enthralled. 5 stars