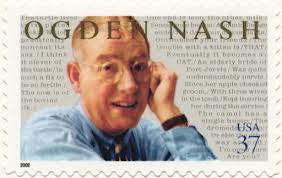 I found this handy little pocket book, published in 1943, at a yard sale. The excellent Introduction, by Louis Untermeyer, reminds me of the early days of The New Yorker magazine. The cover proclaims Nash as “America’s Light-Hearted Laureate.” I couldn’t agree more. While his short poems are most familiar, some of his longer ones really demonstrate his skill at twisting words and spellings a circus contortionist would envy. Here is a poem – “A Brief Guide to New York” -- with all the wit and humor which made Nash famous: "In New York beautiful girls can become more beautiful by going to Elizabeth Arden And getting stuff put on their faces and waiting for it to harden, And poor girls with nothing to their names but a letter or two can get rich and joyous From a brief trip to their loyous. So I can say with impunity That New York is a city of opportunity. It also has many fine theaters and hotels, And a lot of taxis, buses, subways and els, Best of all, if you don’t show up at the office or at a tea nobody will bother their head They will just think you are dead. That’s why I really think New York is Exquisite. And someday I’m going to pay a visit." Chiron, 12/7/12
Posted by Chiron at 4:10 PM