Rose in a Storm by Jon Katz

Back in 2007, I had recently read John Grogan’s wonderful adventure in the pages of his best-selling book, Marley and Me. Now, I love our cats, Zoe and Panguir Ban, but at heart, I am a dog person. So, as a youngster, I read a lot of books about dogs. Some of my favorites included Lad: A Dog by Albert Payson Terhune, and the series by Jim Kjelgaard, which I began by reading Big Red. At one time, I owned half a dozen or so of Kjelgarrd’s books, but sadly, only Big Red – my favorite – remains in my collection. While in the midst of this reading frenzy over canines, I came across The Dogs of Bedlam Farm by Jon Katz, a free-lance writer who lives on a farm in upstate New York. Bedlam Farm tells the true-life adventure of a city man who moves to the country, buys a farm, some sheep, and a sheep-herding dog. I didn’t have much to say about the book back then. I had just begun my book blog, and my reviews were thin. I did like it, but occasionally, the style rankled me.

A few weeks ago, while searching for something else, I found another book by Katz, which had fallen behind others on the shelf. Unlike Bedlam Farm, narrated by the author as he learned the ways of dogs and sheep, Rose in a Storm is a novel about the dog – her experiences, concerns, and her understanding of the world – the farm – and more importantly her relationship with Sam and the other animals. The story is captivating and heart-warming.

Katz writes about his wife’s first visit to the farm. “Sam wasn’t much for nostalgia, but he loved to remember – and tell – the story about when Katie had first come to the farm. He had watched as Katie, tall and thin with long dark-brown hair, had come up to Rose and tried to pet her. Sam had warned her that Rose, then three years old and set in her ways, did not like to be touched, or even approached by people other than him. He was right -- when Katie extended her hand to the dog, she growled and nipped, as he’d predicted. Startled, Katie pulled her hand away. But Sam was impressed by what happened next. Katie calmly stepped back, looking curiously at Rose, who lowered her ears and backed away, too. […] 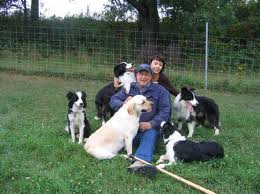 “‘She’s a good dog, a great dog, but she’s a working dog.’ Sam explained to Katie that working dogs are not really pets; they don’t always like or want to be cuddled or petted. ‘She stays focused. It’s her farm,” he said, adding that Rose had little use for things that didn’t involve work, not even treats or toys” (41)

As I begin to train my Labrador puppy to retrieve a throw toy, I naturally tried to reward her for fetching the toy and dropping it at my feet. But she refused even a small liver bite. All she wanted was to chase down the toy and return it to me. The more I interact with my dogs, the greater respect I gain for their intelligence, their loyalty, their affection – and, of course, their impish side.

I need to go back and check more of my shelves. Who knows what other treasures might be hiding there? Jon Katz’s Rose in a Storm deserves the attention of every reader who appreciates and understands the bond between people and the dogs we live with. 5 stars.

I wanted to thank you for this fantastic read!! I definitely enjoyed every
bit of it. I have you saved as a favorite to check out new stuff you post…