The Temple of My Familiar by Alice Walker

African-American writer, Alice Walker’s website provides a brief biography.  It reads, in part, “Alice Walker is an internationally celebrated author, poet and activist whose books include seven novels, four collections of short stories, four children’s books, and volumes of essays and poetry. She’s best known for The Color Purple, the 1983 novel for which she won the Pulitzer Prize—the first African American woman to win the Pulitzer Prize in Fiction—and the National Book Award. (http://alicewalkersgarden.com/about-2/).

I read some of Walker’s works in a women writer’s class in grad school, and I found The Color Purple extremely moving.  The persistence and courage of Celie inspired me in a number of ways.  The Temple of My Familiar came my way at the urging of a close friend.  What I found was something quite different from Purple.

Rather than read this novel, it needs to be experienced.  Yes, the story is convoluted, with an amazing array of characters and time periods, with love and hate, fear and courage, but at the end, characters who possessed the same persistence Walker gave us in The Color Purple.  A map of the family and its shifting relationships would most definitely assist a reader.

One interesting character, Fanny, married to an African man, Suwelo, has visions of historical characters.  Suwelo is a history teacher, and he is skeptical that spirits actually contact Fanny.  He researches one, Chief John Horse, and finds Fanny has described his life in meticulous detail.  Suwelo once asked her about the spirits.  “What do you love about these people?” (186). Fanny replies,

“I dunno.  They open doors inside me.  It’s as if they’re keys.  To rooms inside myself.  I find a door inside and it’s as if I hear a humming from behind it, and then I get inside somehow, with the key the old ones give me, (…) and as I stumble about in the darkness of the room, I begin to feel the stirring in myself, the humming in the room, and my heart starts to expand with the absolute feeling of bravery, or love, or audacity, or commitment.  It becomes a light, and the light enters me, by osmosis, and a part of me that was not clear before is clarified.  I radiate this expanded light.  Happiness.  /  And that, Suwelo knew, was called ‘being in love’” (186). 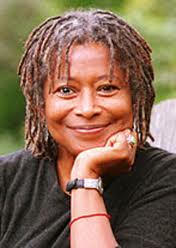 Another character, Lissie, remembers in great detail all of her past lives – from a childhood in Africa, to one during the middle passage, through to one as slavery ended and another during the civil rights movement of the 60s.

Some novels require a great deal of patience and close reading.  Not all are worth that extra effort, but Alice Walker’s Temple of my Familiar most certainly is.  The only flaw involved rapid shifts of time and place, which I found confusing.  Despite this, I did not invoke my rule of 50, and my persistence paid off.  One chapter explains the life of Lissie, and it all fell into place.  5 stars