According to the Poetry Foundation, Pablo Neruda was born Ricardo Eliecer Neftalí Reyes Basoalto in southern Chile on July 12, 1904.  He led a life charged with poetic and political activity.  In 1923 he sold all of his possessions to finance the publication of his first book, Twilight, which was issued under the pseudonym "Pablo Neruda" to avoid conflict with his family, who disapproved of his occupation.  The following year, he found a publisher for Twenty Love Poems and a Song of Despair.  The book made a celebrity of Neruda, who gave up his studies at the age of twenty to devote himself to his craft.  In 1939, he was named Chilean Consul to Mexico.  Upon returning to Chile in 1943, he was elected to the Senate but was expelled for his leftist political views, and he went into hiding.  In 1952 Neruda returned to Chile, and for the next twenty-one years, he continued a career that integrated private and public concerns and became known as the people's poet.  During this time, Neruda received numerous prestigious awards, including the International Peace Prize in 1950, and the Nobel Prize for Literature in 1971.  Forty years ago, on September 23, 1973, the man widely regarded as one of the greatest Latin-American poets, died of leukemia in Santiago, Chile.

I have come to love and reread and read again so many of his poems, picking a representative sample is difficult.  One of my favorites comes from his second book, Twenty Love Poems, ”Leaning into the Evenings.”  “Leaning into the evenings I throw my sad nets to your ocean eyes. // There my loneliness stretches and burns in the tallest bonfire, / arms twisting like a drowning man’s. // I cast red signals over your absent eyes / which lap like the sea at the lighthouse shore. // You guard only darkness, my distant female, / sometimes the coast of dread emerges from your stare. // Leaning into the evenings I toss my sad nets / to that sea which stirs your ocean eyes. // The night birds peck at the first stars / that twinkle like my soul as I love you. // Night gallops on her shadowy mare / scattering wheat stalks over the fields.” // (5).

New York Times Book Review critic, Selden Rodman wrote, “No writer of world renown is perhaps so little known to North Americans as Chilean poet Pablo Neruda.”  New York Review of Books critic John Leonard wrote, Neruda “was, I think, one of the great ones, a Whitman of the South.” 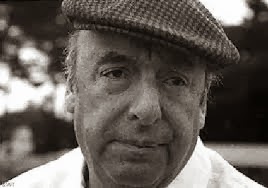 Several writers claim Neruda is difficult to translate, and what has appeared in English represents only a small portion of his work.  Others criticize him for his leftist views.  Ignore his politics, and bathe yourself in his verse.  Here is a brief excerpt from “Poetry,”  “And it was at that age … poetry arrived / in search of me.  I don’t know how, I don’t know where / it came from, from winter or a river / I don’t know how or when, / no, they weren’t voices, they were not / words, nor silence, / but from a street it called me, / from the branches of the night, / abruptly from the others, / among raging fires / or returning alone, / there it was, without a face, / and it touched me // (167).  Let Neruda touch your heart.  You will be forever changed.  5 stars.