The Narrow Road to the Far North by Richard Flanagan

The 2014 winner of the Man Booker Prize proved to live up to the extremely high levels of literary fiction I have come to expect.  In fact, this novel has helped me formalize my ideas about literary fiction.  To some, literary fiction implies snobbery in reading.  I could not disagree more.  To me, literary fiction is a novel which carries the reader along on a cool breeze of prose.  I care not a wit for how it will end, or “whodunit.”  Rather, I immerse myself in delicious prose that nearly convinces me I am in the story, observing, listening, and learning.

Richard Flanagan’s The Narrow Road to the Far North does all this and more.  I have read numerous books which detailed – in whole or in part – the horrors of the Holocaust.  I knew about other atrocities committed by all sides during World War II – the fire-bombing of Dresden comes to mind not to forget Hiroshima and Nagasaki – and I knew from the film Bridge on the River Kwai some of the sordid details of the abuse of prisoners of war in a futile attempt to build a railway through Southeast Asia,

But Flanagan has taken me to the jungle, the prison camps.  He has shown me the starvation, the agonizing and painful deaths from cholera, beri-beri, dengue fever, malaria, surgery without anesthesia, on top of beatings, torture, and public beheadings.  Now you might think, “How can such a horrific book be enjoyable?”  Good question!  Flanagan manages to spend large portions on the novel focusing on lives of some men before the war and after – including the Japanese camp guards and officers.  He humanizes, without excusing.  He explains without judging.

Dorrigo Evans is a doctor and a colonel in the Australian army.  Along with about a thousand men, he has been captured by the Japanese and sent to build a railroad through nearly impenetrable jungle.  A rather complex character, Evans has attained a position of respect and is a celebrity and a hero for his actions in the war.  Flanagan writes, “It was hot in the room, but it felt to him far less stifling than the poetry reading below.  He pulled out a book here and there, but what kept catching his attention were the diagonal tunnels of sunlight rolling in through the dormer windows.  All around him dust motes rose and fell, shimmering, quivering in those shafts of roiling light.  He found several shelves full of old editions of classical writers and began vaguely browsing, hoping to find a cheap edition of Virgil’s Aeniad, which he had only ever read in a borrowed copy.  It wasn’t really the great poem of antiquity that Dorrigo Evans wanted though, but the aura he felt around such books --  an aura that both radiated outwards and took him inwards to another world that said to him he was not alone.  //  And in this sense, this feeling of communion, would at moments overwhelm him.  At such times he had the sensation that there was only one book in the universe, and all books were simply portals into this greater work – an inexhaustible, beautiful world that was not imaginary but the world as it truly was, a book without beginning or end” (48). 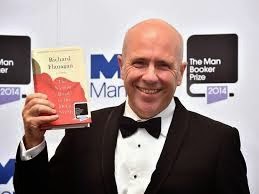 I share this sentiment with Dorrigo, and when he sleeps, he has “beside his bed, as he always did, no matter where he was, a book, […].  A good book he had concluded, leaves you wanting to reread the book.  A great book compels you to reread your own soul” (22).  Richard Flanagan’s novel, The Narrow Road to the Deep North is a great book.  Read it and revisit your own soul.  5 stars