All the Light We Cannot See by Anthony Doerr

I tend to shy away from books I perceive as over-hyped, and sometimes that decision is a mistake.  One friend I particularly trust – who shares my view of the too heavily promoted novel – told me I would like Anthony Doerr.  It is a wonderful thing to have a circle of trustworthy sources.

Anthony Doerr has written several novels and won numerous awards, including 4 O. Henry Prizes, 3 Pushcarts, a Guggenheim Fellowship, and a handful of others.  He lives in Boise, Idaho.  All the Light We Cannot See is his latest novel.

Marie-Laurie LeBlanc lives with her father in Paris, France.  She is blind, and her father has constructed an accurate – to the smallest detail – model of their neighborhood.  Using only her sense of touch, she learns how to navigate the city, counting storm drains, benches, fragrant shops, and other landmarks.  Eventually, she is able to walk around the city on her own.  When the German army invades France, Monsieur Daniel LeBlanc flees with his daughter to the walled city of St. Malo, which has resisted invaders for centuries.  He is a gem and mineral expert, and Daniel takes possession, for the Paris Museum of Natural History, a fabled diamond known as “The Sea of Fire.”

Werner Pfennig is a rather precocious orphan, who has a remarkable ability to build and repair radio equipment.  The orphanage is run by Frau Elena, a Protestant nun from Alsace, who sings French folksongs and teaches the children her language.  Together with his sister, Jutta, the children listen to French broadcasts about science, history, literature.  Word spreads of Werner’s talents, and neighborhood residents begin flocking to the orphanage for his help.  The Nazis learn of his talent, and send him to an exclusive school for engineering and science in Berlin.

A fourth important character is Sergeant Major Reinhold von Rumpel.  He has an extraordinary talent as a gem expert.  As the Nazis vacuum up priceless works of art, von Rumpel searches for The Sea of Fire.  He knows about Daniel and his daughter and the diamond.

How these individuals intersect and come together at the end of the novel requires an amazing web of story-telling I have rarely encountered.  Daniel has purchased – with great sacrifices – some Braille books for Marie-Laurie, and she learns to read.  Doerr writes, “Thos last nights in Paris, walking home with her father at midnight, the huge book clasped against her chest, Marie-Laurie thinks she can sense a shiver beneath the air, in the pauses between the chirring of the insects, like the spider cracks of ice when too much weight is set upon it.  As if this time the city has been no more than a scale model built by her father and the shadow of a great hand has fallen over it. // Didn’t she presume she would live with her father in Paris for the rest of her life?  That she would always sit with Dr. Geffard in the afternoons?  That every year, on her birthday, her father would present her with another puzzle and another novel, and she would read all of Jules Verne and all of Dumas and maybe even Balzac and Proust?  That her father would always hum as he fashioned little buildings in the evenings, and she would always know how many paces from the front door to the bakery (40) and how many more to the brasserie (32), and there would always be sugar to spoon into her coffee when she woke? vv […]  Now? What will happen now?”  (71-72). 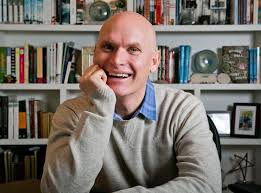 As the conflict inches closer to D-Day, the tension mounts.  Three of the characters meet in St. Malo.  Anthony Doerr’s novel, All the Light We Cannot See is a magnificent tale of World War II from the viewpoint of some of its most innocent witnesses.  I strongly recommend this book for lovers of suspense, joy, misery, fear, and love.  5 stars.