The Painter by Peter Heller

About two years ago, I read a first novel by Peter Heller.  The dystopian landscape he painted in The Dog Stars, captured my imagination immediately.  I met Heller at a library conference and was further intrigued by the author himself.  He has an impressive resume of non-fiction work, as well as duties on NPR.  Earlier this year, my wife surprised me with a copy of his latest novel, The Painter.

Jim Stegner is a painter with a checkered past.  He shot a man in a bar, and spent some time in prison.  He has a passion for fly fishing, which he did with his daughter Alce (sic), until she got involved in a drug deal which went bad.  The perp stabbed her numerous times and left her in an alley.  As often happens, this led to the breakup of his marriage.  Now paroled, he has settled in Colorado, established himself with a trendy gallery, and his paintings sell in the middle to high five figures.  On a routine drive to a fishing hole, he finds the road blocked by horse trailer.  Two men attempt to wrangle a horse into the trailer.  One of the men gets a 2x4 from his truck and begins beating the horse.  Jim’s temper gets the better of him, and he attacks the man, breaks his nose, and pushes him into a ditch.  The other man attacks Jim, and he ends up on the ground.  The two horse-beaters leave Jim with the horse.

This apparently innocuous event begins to form a maelstrom sweeping Jim into a mess of enormous proportions.  prose is so intense, I felt myself beside him in the dark woods.  I walked with him, the branches scraped my arms, shadows followed me, I saw figures moving in the brush.  The sense someone was after me overpowered me, and forced me to take breaks from reading parts of the novel. 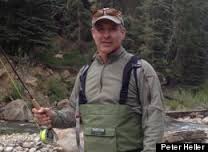 One particularly intense scene occurs during the end of the novel.  Jim calmly fishes a stream.  Suddenly, “‘OW!’ // Hard pressed under my jaw the cold prod.  Steel.  I knew without a thought that it was a gun. // ‘Prince nymph, good choice.  What I’d use probably.’ // I couldn’t see him.  He was behind me with the handgun held out and up against my throat.  His voice was graveled, as if he hadn’t spoken in a while. // ‘Can’t lose tonight.  Nobody feeding up top, all gathered up in the deeper pools, idling, just waiting for that thing to tumble by.’ // His voice in the back of my ear.  Could smell the chew on his breath, not a bad smell, Copenhagen.  Couldn’t look though, couldn’t turn my head, because there was the cold muzzle hard against the bone.  The quickening of my heart. // ‘Hi, Jason.’ // A long silence while the snout of the handgun held pressure against my head” (353-354).  This encounter continues for a terrifying and tense 10 more pages.  I read the conclusion to this novel in about 4 chunks.  The intensity prevented me from stopping, but I needed the breather.  I expected something terrible to happen almost from the time Jim pushed the man into the ditch.  Things did happen, but not the way I expected.  You will have to figure out the ending for yourself.

This roller-coaster novel swings between pleasant peaceful experiences and terrifying car chases, fly fishing in a mountain stream, scary moments in the woods, and shots fired at a house Jim visited to complete a portrait commission.  I am anxiously awaiting the next novel by the talented author, Peter Heller.  I hope he can top his latest, The Painter.  5 stars