The Buried Giant by Kazuo Ishiguro

According to the author’s bio in The Buried Giant, Kazuo Ishiguro is the author of six novels, including Never Let Me Go and Remains of the Day, which won the Booker Prize and was adapted into an award-winning film.  Ishiguro’s work has been translated into forty languages.  In 1995, he received an Order of the British Empire for service to literature, and in 1998 was named a Chevalier [of the Order of Arts and Letters] by the French government.  All his novels have a serene and ethereal feel to them.  His latest novel, The Buried Giant, has these qualities, while conveying the atmosphere and setting of the middle ages.

Axl and Beatrice have lived a long life together.  Their village consisted of a series of chambers making up a warren.  Their chamber sat close to the opening, as if near death, they could easily leave, and a slightly younger couple could move into that living space.  One day, he rises early.  Ishiguro writes, “…on this particular morning, Axl had abandoned his bed altogether and slipped quietly outside to sit on the old warped bench beside the entrance to the warren in wait for the first signs of daylight.  It was spring, but the air still felt bitter, even with Beatrice’s cloak, which he had taken on his way out and wrapped around himself.  Yet, he had become so absorbed in his thoughts that by the time he realized how cold he was, the stars had all but gone, a glow was spreading on the horizon, and the first notes of birdsong were emerging in the dimness. // He rose slowly to his feet, regretting having stayed out so long.  He was in good health, but it had taken a while to shake off his last fever and he did not want it to return.  Now he could feel the damp in his legs, but as he turned to go back inside, he was well satisfied: for he had this morning succeeded in remembering a number of things that had eluded him for some time” (5). 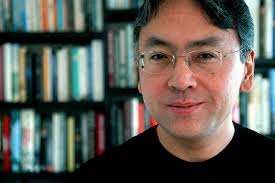 Axl does not suffer from dementia, nor from Alzheimer’s.  His land is poisoned by the breath of a dragon which robs the inhabitants of their memory.  Ishiguro writes, “…in this community the past was rarely discussed. […] it had somehow faded into a mist as dense as that which hung over the marshes” (7).  I sense a great allegory in this tale, but only a second reading -- with that in mind -- will reveal the underlying truth of this story.

Ishiguro has written a tale part errant knights of the round table, part Beowulf, and part Lord of the Rings, and all adventure.  Axl and Beatrice are deeply in love, and they have suddenly recalled their long lost son who moved to another village.  They decide to go in search of him, so they can spend their final days with him.

I have read three of Kazuo Ishiguro’s novels, and I found all absorbing, stimulating, and thought-provoking.  I am positive The Buried Giant will not be my last novel by this talented and entertaining author.  5 stars