In a graduate class on Victorian Literature at Baylor, we read most of Woolf’s works.  I had come to the class having only read Mrs. Dalloway, which I greatly enjoyed.  Orlando immediately became another favorite of her novels.  On October 5, 1927, Virginia Woolf began writing a story she had worked through her mind for months.  Now Woolf, an early modernist influenced by James Joyce, is most certainly an acquired taste.  The novel, Orlando, is, as she wrote, a fictional “biography beginning in the year 1500 & continuing until the present day” (Nissley, A Reader’s Book of Days 316).  I decided to revisit this unusual novel, but a rather peculiar thing happened to me.  I found the story a tough read, and as the novel progressed, I found it harder and harder to continue.  For once a novel did not stay with me, and I can say I did not enjoy the read at all.

The story begins with Orlando, a handsome young man, heir of titles and lands dating back to William the Conqueror.  He becomes a favorite of Queen Bess.  As Woolf writes, “For the old woman loved him.  And the Queen, who knew a man when she saw one, though not, it is said, in the usual way, plotted for him a splendid ambitious career.  Lands were given him, houses assigned him.  He was to be the son of her old age; the limb of her infirmity; the oak tree on which she leant her degradation.  She croaked out these promises and strange domineering tendernesses (they were at Richmond now) sitting bolt upright in her stiff brocades by the fire which, however high they piled it, never kept her warm” (9).

Woolf, an ardent feminist, details the habits and peculiarities of men, and then turns her attentions to the onerous life of women with all the strictures placed upon them in regard to marriage, ownership of property, and public, as well as private, activities.  She also comments on Elizabethan, Enlightenment, Victorian, and 20th century attitudes towards women.

Woolf writes, “crime and poverty had none of the attraction for the Elizabethans that they have for us.  They had none of our modern shame of book learning; none of our belief that to be born the son of a butcher is a blessing and to be unable to read a virtue; no fancy that what we call ‘life’ and ‘reality are somehow connected with ignorance and brutality; nor, indeed any equivalent for these two words at all” (13).  Yes, these lines found themselves on paper in her distinctive purple ink in 1927. 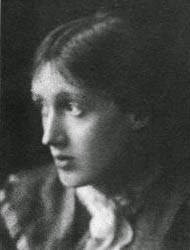 Orlando constantly struggles with loneliness and isolation concomitant with his position among the nobility.  As he rises to the title of Duke, he begins to detest the hypocrisy of the upper class and the shallow gossip of those who pretend to intellectualism.  Orlando befriends, Alexander Pope, Joseph Addison, and John Dryden and attends gatherings with Swift, Johnson, and Boswell.  Finally, an invitation is extended to Pope and Addison, and they have tea and conversations worthy of those eminent men.

Half way through Virginia Woolf’s Orlando, the well-foxed old paperback began to fall apart, as if trying to end the chore I had set for myself.  But I have ordered a new copy, with annotations, and I will try again soon.  So, I find myself perplexed.  Do I dare reread Mrs. Dalloway?  I think not.  I will hold that one in my memory.  From 1995 or thereabouts, 5 stars