The Geographer’s Library by Jon Fasman

The Geographer’s Library by Jon Fasman, a recent read for my book club, got off to a slow start, but it gradually gathered some substance and proved to be an interesting and entertaining read.

Paul Tomm, a recent graduate of Wickenden College in Connecticut, has returned to the town of his alma mater to take a job at a local newspaper.  He writes a few pieces about local events, and then his editor assigns him to write an obituary for a former professor.  Paul discovers few people know anything about Professor Jaan Pühapäev – not even his age or date of birth.  Then the coroner who examined the body dies after a hit and run accident.  Paul is a rather naïve young man, who seems to lack some pretty basic knowledge for a college grad.  For example, he does not know the meaning of the word “caduceus.”  The lure of interest in the story by an editor at a large Boston daily paper drives Paul to dig into the case.

This novel is a really quick read.  It also has an interesting structure.  At the root of the murders is a collection of mysterious alchemical items – stolen from the library of a prominent philosopher, geographer, and alchemist in the 12th century.  Persons unknown are collecting the items, which have been scattered around the world.  Interspersed between the chapters Fasman has inserted line drawings and catalogue descriptions of the items.  For example, Fasman writes, “Item 1: An alembic is the top part of an apparatus used for distilling.  This one is made of sturdy green glass, 36 centimeters tall, 18 centimeters around at the widest point of the base.  The top part of the vessel is narrow and fluted, and turns sharply to the right; alembics are set over a still to collect and carry vapors to another vessel” (18).  This information is followed by date and name of manufacturer, place of origin, last known owner, and estimated value (18-19).  Each of these items figures in the story of the murders and the shadow characters trying to sell or acquire these items. 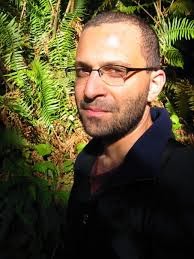 Fasman also has a nice eye for description and details.  He describes a train ride for one item sought after in Siberia by some corrupt Soviet officials.  Fasman writes, “As soon as the train’s chuffing settled into a regular rhythm, Yuri fell into a boozy and heavy-headed sleep.  When he awoke, the familiar chaotic Moscow vista – squat brick factories either half built or half ruined, birch trees stationed haphazardly in front of massive apartment blocks, wires and streets radiating outward from the tracks into the city’s heart – had given way to endless pine forests punctuated once in a rare while by villages consisting of little more than a few dirt roads and twelve to fifteen tiny dachas, aglow from the inside, nestled close together like gossiping smokers in a tavern” (70).  He also has some rather clever sentences.  For example, “mountains poking through the snow like crumpled birds spanned the other bank, stretching and rising all the way to the Tien Shan Mountains in the distance” (75).

For mystery fans, the connection among these characters and items is not easily apparent.  My hope is that a sequel is in the works to tie up many of the loose ends.  3 stars