The Transcriptionist by Amy Rowland

For readers who enjoy fiction set in a newspaper as much as I do, Amy Rowland’s debut novel, The Transcriptionist, offers a different viewpoint on this venerable genre.  While clearly not in the same class as Pete Dexter, Carl Hiassen, or Christopher Morley, it does provide a few hours of entertaining reading.  Amy spent more than ten years at The Times as a transcriptionist.

Lena works as a transcriptionist for a national daily newspaper based in New York City, which sounds suspiciously like The New York Times.  She works alone “on the eleventh floor, at the end of a rat-hued hallway that some workers at the newspaper have never seen” (1) as Rowland describes her office.  Her job requires her to answer a bank of phones, set up recordings, and then transcribe and forward to the appropriate editor.  Because of computers and the internet, Lena is the last of her occupation at the newspaper.  If it weren’t for places in the world without internet, her job would most likely be eliminated.

One day, while riding the bus to work, Lena observes a blind woman reading Braille.  She talks to her for a few moments, and then she gets off the bus.  A few days later, she transcribes a story about an apparent suicide at the zoo.  A woman climbed over a wall, waded across a moat and was attacked and mauled by lions.  When she sees the woman’s photograph, she recognizes her as the blind woman on the bus.

After the brief news article, the story drops out of sight, until it was revealed the morgue had lost the woman’s body.  She had a sister, and Lena decides to find out what really happened.  She transforms herself into a reporter, and visits the dead woman’s sister.

As an interesting sidelight, the blind woman’s sister, Ellen Lebow, is a Chaucer scholar, who has proven the authenticity of a Chaucer manuscript.  As a former grad student in English, Lena discusses the discovery, and her literary sensibilities rise to the surface. 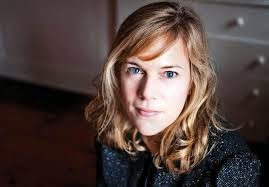 Lena develops a bond with the blind woman, Arlene, and begins a conversation by calling the Recording Room where she works leaving a message for Arlene.  Rowland writes, “‘Arlene, I went to see your sister today.  I don’t know if I should have gone.  And it didn’t make me feel any closer to you.  I felt closer to you this morning, when I saw a falcon devour a pigeon.  It was in Madison Square Park, that odd little pocket of space.  As I approached the William Seward statue, the forgotten abolitionist, there was a quietness, a stillness, and a few isolated sounds, a gasp, a curse, a question.  I paused and heard someone say, “It’s a falcon.  He’s got a pigeon.  The pigeon is – oh God, the pigeon is alive, he’s struggling.  Oh.”  We all stood motionless, honoring the pigeon, the falcon, a life ending before us.  I could see the falcon holding the humble bird in its talons and tearing into it as the pigeon still pulsed with life.  We watched in awe and wonder; it seemed a very dignified death, though probably not for the pigeon.  It was shocking to see nature assert itself in the middle of Manhattan” (112-113).

Amy Rowland’s The Transcriptionist relates a story of loneliness and loss, but it is far from maudlin.  Moments of humor – especially Lena’s quoting of literature from her English Major days.  She wants Arlene to be remembered, as she remembers passages.  These memories are her constant companions.  4 stars