The winner of the 2014 Nobel Prize in Literature is French author, Patrick Modiano, but to us in the west, an obscure writer who has written 17 books and won every major literary prize in France.  When the Nobel was announced, I rushed to get a copy of one of his novels, and found only one available in English: Honeymoon.  Since then, several more have surfaced, and I plan on reading those as soon as possible.

Honeymoon is a peculiar novel, intriguing, nonetheless.  It tells the story of Jean B., a documentary film maker who pretends to fly to Rio, but he actually returns to his apartment in suburban Paris.  His intent is to imagine the lives of two people he had met 20 years before while evading the French police and Nazis in Vichy France.  Jean is alone, and he begins to travel with Ingrid, a Danish woman and Rigaud, a French national.  His intentions quickly evolve into an obsession.

Modiano’s prose is plain and simple, but his story-telling ability more than compensates for any perceived or misperceived simplicity in his writing.  The story became so real, I was sometimes startled by tidbits in the story which reminded me I was not in the France of World War II.

Jean B. seeks solitude to unravel the puzzle of the lives of Ingrid and Rigaud.  Modiano writes, “I was lying on the mattress, staring at the sky and the top of the pines.  I could hear shouts coming from the swimming pool, down below, and the sound of people diving.  Above me, between the branches, the play of sun and shade.  I let myself sink into a delightful torpor.  Remembering it now, it seems to me that that was one of the rare moments in my life when I experienced a sense of well-being that I could even call Happiness.  In that semi-somnolent state, occasionally interrupted by a shaft of sunlight piercing the shade of the pines and dazzling me, I considered it perfectly natural that they had taken me home with them, as if we had known each other for a long time.  In any case, I had no choice.  I’d just have to wait and see how things go” (19).

The young Jean B. apparently had a crush on Ingrid, and now, he tries to reassemble her life from fragments of his memory and off-hand remarks she made during their travels.  While in Paris, he makes two discoveries.  The first is a suicide in a Milan hotel he registered in, and the second is a list of seven people living in and around Paris with the surname, Rigaud.  He must decide what to do with this information, while concealing his location from family, friends, and co-workers – some of whom awaited his arrival in Rio de Janeiro. 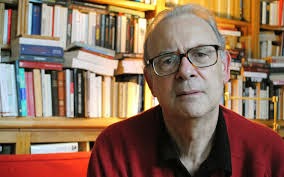 While Patrick Modiano uses sparse language – approaching, but not quite reaching the sparseness of Hemingway – this story is thoroughly enjoyable, with just a dash of suspense.  Honeymoon is one of his more popular novels, but I await a delivery from Amazon to discover more treasures by this writer who has escaped my attention.  Thanks, Nobel Committee!  5 stars.