The Happiest People in the World by Brock Clarke

I am not sure how to classify this novel.  It has CIA spies, terrorists, and a host of characters as if from a reincarnation of Twin Peaks.  Brock Clarke’s latest novel, The Happiest People in the World, is an amusing romp from Denmark to Broomsville in upstate New York.

Clarke lives in Maine and teaches at Bowdoin College.  He has two collections of stories and a critically acclaimed novel, An Arsonist’s Guide to Writers’ Homes in New England.  Happiest People is his third novel.

I was a bit confused at first, because of a slew of individuals were known only by their code names.  But as the story progressed, and the identity of these amateur James and Janet Bonds revealed themselves, this tragi-comedy developed into a thrilling tale.  While the serious ending was hardly funny, it had a Keystone Cops quality that at least raised a smile.

Jens Baedrup works as a cartoonist for an obscure Danish newspaper in a remote corner of the peninsula.  Following the publication of the notorious cartoons depicting images of Mohammed, the publisher – a bored, fourth-generation holder of that position – decides he can escape by republishing the offensive cartoons, and he orders Jens to add another of his own cartoons making fun of the prophet.  As a result, the newspaper building is burned down, as is Jens home, which happened to be empty at the time.  His marriage teetered on the edge of collapse, so the Danish police indicated the cartoonist was found dead inside.  They whisked his wife away to a remote location, and sent Jens into hiding.  After several unsuccessful moves to keep him safe, they turned him over to the CIA.  His handler, known only as “Locs,” spirited him to Broomville in upstate New York to work as a guidance counselor in a small high school.  The principal of the school fired the alcoholic counselor to make way for Jens, now known as Henrik Larsen.  Then the fired counselor turns up dead. 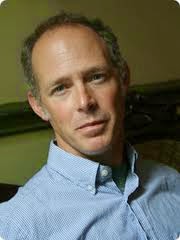 Brock’s prose is light and breezy – up to a point.  On occasion, the characters lapse into interior monologues comprising long sentences.  In this example, the school principal Matty receives a call from a former lover.  “‘I’m not even supposed to be thinking about you,’ he said into his cell phone. ‘Let alone talking  to you.’ // ‘So don’t talk,’ she said.  ‘Just listen.’ // So Matty did that.  She talked for a long time, long enough for him to understand that after he’d ended their affair seven years earlier, she’d been so angry at him and at Broomville and at the freaking world that she’d decided to go to work for the CIA, long enough for him to understand that – in her capacity as a CIA agent and his capacity as an American citizen – she wanted him to do her a favor, long enough for him to get up out of the chair, walk out of his office, out of the building, out into the parking lot.  He kept turning in circles while he listened to her talk’ (25).

As all the major characters converge on Broomville, I expected a cataclysmic explosion.  When smoke cleared, I got a most unexpected surprise.  5 stars