An Italian Wife by Ann Hood

I met Ann Hood back in 1989 at an American Booksellers Association Convention.  Her line was not long, but the novel she signed seemed intriguing.  I liked it, but it did not overwhelm me.  Recently, I stumbled upon The Obituary Writer published in 2013, and that gave me a whole new view of Ms. Hood.  Her latest novel, An Italian Wife, represents quite a departure from her earlier works I have read.

This explicit novel tells the story of four generations of Italian women.  It begins with Josephine, then her seven children, seven grandchildren, and nine great grandchildren.  What all these women show is the transformation in the way women view and react to the men in their lives.  It covers them through World War I, World War I, and into VietNam.

Josephine is an entirely innocent 14-year-old when her mother marries her off to a man eleven years her senior.  After a horrific wedding night, he promptly leaves for America, promising to send for her when he has established himself in the new world.  Fortunately, Josephine does not conceive a child, and nine years later, word comes she will leave for America within a few days.  Now 23, Josephine does not want to leave her family, friends, and familiar routine.

In an example of this transformation, Hood describes the experience of Francesca, Josephine’s oldest grandchild, who lost her husband at Normandy.  She writes, “Francie Partridge grew up Francesca Caserta less than a mile from Meadowbrook Plat.  As she navigated the familiar path home, her car filled with the lilacs she had gathered for her grandmother, Francie felt like she was driving a long distance, traveling to a place far away.  Once she passed the French church, where the French Canadians went to mass, she entered the Italian part of town.  Instantly, everything looked different.  Vegetable gardens replaced backyards; shrines to the Virgin Mary stood in place of barbecue grills or patio furniture; fig trees and cherry trees dotted yards instead of leafy maples and elms.  People sat on front steps and sidewalks.  Men at folding tables at the edge of the street played cards, smoked cigars, drank homemade wine.  Everyone was yelling – fighting, calling children, talking too loud.  Francie hated it here.  Hated the noise, the smells, the plastic Virgins watching her” (179). 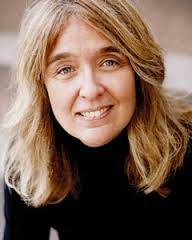 Each generation of women has a completely different attitude toward sex.  Warning: the novel contains numerous scenes of explicit sexual encounters of all sorts.  I did not see this in The Obituary Writer, which I recently reviewed and enjoyed.  I do not recall this from her earlier work, either.  However, she shows how women have been “bought and sold” and used and abused over the years.  Until they begin to control their own bodies in the seventies.  The novel also traces radical changes in the attitude these women had toward religion.

While some readers may be offended, Hood paints a terrific portrait of the changes women have endured, desired, and accepted over the years.  In addition, she shows how war has destroyed veterans and torn families apart.  This excellent, absorbing novel deserves 5 stars