The Palace of Books by Roger Grenier

When I first heard about Roger Grenier and his latest work, The Palace of Books, I was certainly intrigued.  When I first looked at this book-length essay, I lost some of my enthusiasm, but I began to read with my rule of fifty in the forefront of my mind.  As I neared that “line in the text,” I began to understand Grenier’s ideas, so I accelerated onto the end.  Grenier has written a thoroughly enjoyable analysis of literature for readers and writers.  He organizes this essay – not by genre, time period, author, or country – but by ideas.  He weaves a wonderful tapestry connecting various works dating back to the ancient Greeks and Chinese all the way into the 20th century.  He seems to effortlessly draw examples from the library of his mind.

This slim volume will appeal to anyone interested in reading and/or writing.  He deftly connects quite a few dozen works of literature, because they demonstrate the continuity of devices writers use to accomplish or abandon their intentions in a particular work.  Each chapter poses an idea then takes the reader on a whirl-wind tour of authors who have tackled that problem, or, in some cases, those unable to avoid the inevitable because of death, or worse writer’s block.

My favorite chapter is “Private Life.”  Grenier introduces each chapter of the essay with a question.  For example, “Is knowing the private life of an author important for understanding his or work” (56).  I have always believed the answer to be yes, because the author’s life provides a context for the work.  It may or may not help in the understanding, but at least it becomes a piece of the puzzle.  Grenier seems more concerned with how much weight a reader places on this information.  He writes, “As long as you have not asked yourself a certain number of questions about an author and answered them satisfactorily, if only for your private benefit and sotto voce, you cannot be sure of possessing him [or her] entirely.  And this is true, though these questions may seem to be altogether foreign to the nature of his [or her] writings” (56).  So we agree, at least in part.

Roger quotes Chekhov’s Notebook, “How pleasant it is to respect people!  When I see books, I am not concerned with how the authors loved or played cards; I only see their marvelous works” (58).  He then quotes J.B. Pontalis, who “suggests with a touch of malice that Proust and Freud […] don’t want their own private lives examined: if Proust’s perversion of torturing rats was discovered” (59).  Sometimes this obsession with privacy can have tragic effects.  I recall the destruction of an unfinished novel and the diary of Emily Brontë by her sister Charlotte.  What treasures have we lost?  Should we Google J.B. Pontalis to find out who he is?  I did.  He also quotes a mysterious person I could not identify, known only as “Aragon,” who wrote, “My instinct, whenever I read, is to look constantly for the author, and to find him, to imagine him writing, to listen to what he says, not what he tells; so in the end, the usual distinctions among the literary genres – poetry, novel, philosophy, maxims – all strike me as insignificant” (60).  I am with “young Aragon of 1922.”  Grenier adds, “One retreats into oneself in order to communicate better with others” (61).  If the book has a flaw, it might be the lack of any reference to some of the more obscure writers he mentions. 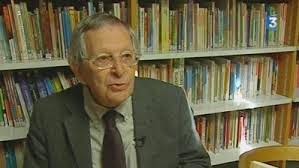 Finally, Grenier writes, “If I were asked what a literary creation amounts, to, I would say that it’s about choosing among past or present realities.  Faced with a character or a story, you say to yourself, ‘that one is for me, that one isn’t for me.’  By that I mean it does or doesn’t correspond to my sensibility, my way of understanding life, and finally to an esthetic, to a certain music that emanates from that esthetic.  Memory obviously goes along with choosing and doubtless has already made its own choice” (67).  Amen.

For an interesting tour of literature and a literary mind, I highly recommend The Palace of Books by Roger Grenier.  5 stars